If anyone has early photos of our locos, carriages, wagons and buildings etc (or any Wanganui Rail history) during their working careers we would love to see them.

During September 1896, Petone Workshops produced 3 unusual 35 foot long passenger carriages, A 519, A 520 and A 521. They all had elevated (clerestory) roofs which were boarded up - at first on one side only, in an attempt to combat the ferocious winds often experienced on the Rimutaka Incline. Later the other roof side was similarly done as NZR passenger carriages were arbitrarily turned every six months in that era, The 3 second class cars seated 34 on longitudinal benches and had a toilet at one end. These became known as the Wairarapa roofed carriages.

Around November 1900 Westinghouse brakes were fitted and standard platform gates were also fitted in November 1919. The underframe was of Australian Tallowwood with the body being Kauri and Red Pine. All window and ventilator frames were of Teak. The outside sheathing was of T & G Red Pine while the inside was Kauri with the facings being Red Pine.

January 1937 Cars A 519 became Ea 351 and A520 became Ea 352 as they were converted for Ways and Works service as bunk cars for men working at remote sites. Both were based in the Wanganui District. A 521 was written off at the Hutt Workshops in January 1956, and remained as a passenger car. The 2 remaining cars were finally written off at the Eastown Workshops on the 17th August 1963. It was thought that A 519 (EA 351) was then transferred to the Ferrymead Railway in Christchurch but after some inquiries no trace of this car has been found.

In around November of 1963 the body of car A 520 was sold locally and was shifted to a Waitotara farm some miles away from Wanganui. There it was placed on piles and had a corrugated iron placed over the top protecting it from all the weather. This was then used by the new owner as sleeping quarters while he did his fencing contracts around the district. This person was also a keen preserver and so the carriage stayed in its original form apart from the iron roof and the odd coat of paint.

In July 1999 SteamRail Wanganui was informed that this car was no longer required as the owner had since passed on and that it was in the road for future expansions on the farm. Upon investigation and also removing a number of layers of paint the members found that it was car A 520 and was at least 90% still in it's original condition.

In January 2000 after the deceased daughters gifted the car to SteamRail Wanganui it was transported to our Club's site with the help from Emmetts Crane Hire and Hookers Pacific Transport. To the clubs knowledge this is now the only car of its type remaining in New Zealand and has been placed temporarily on its new (ex tank wagon) bogie underframe, given a coat of green paint to protect its timberwork and is in our shed waiting for its turn to be restored.
A  .  520   built 1896 at Petone Workshops
A  .  520   reclassified 30/01/1937 to E.352
E  .  352   reclassified c1943 to EA.352
EA .  352   w/off 17/08/1963 at East Town Shops 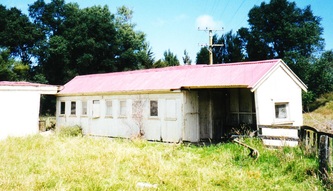 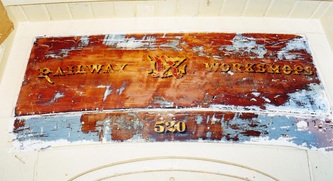 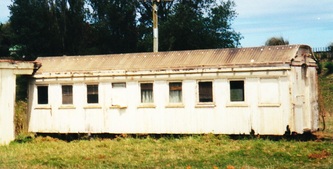 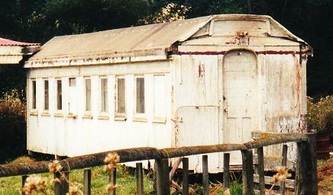 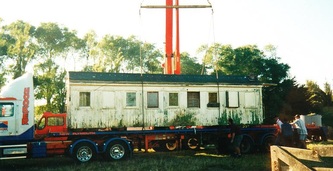 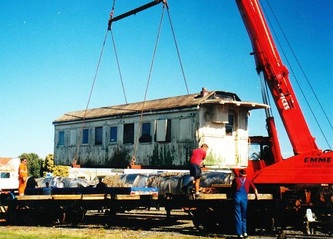 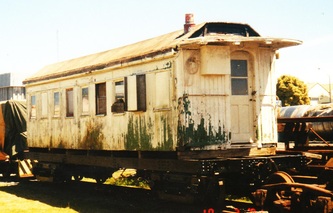 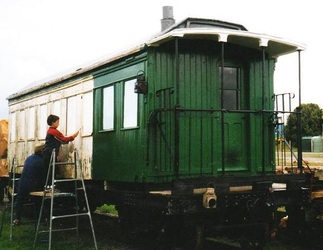 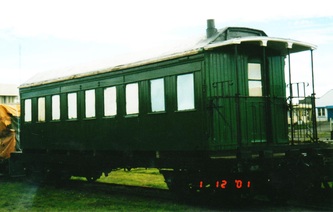 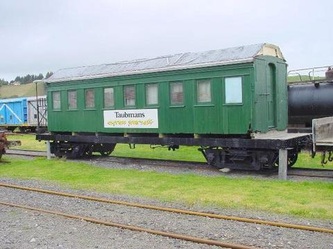 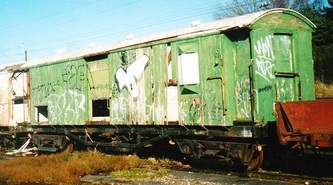 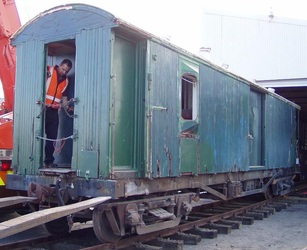 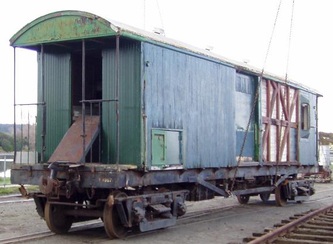